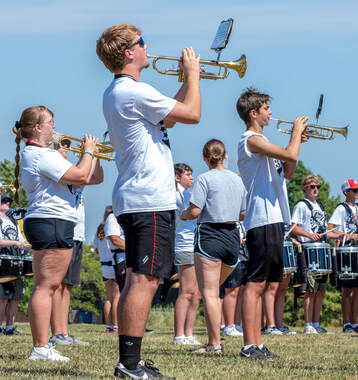 Brayton Lind, center, was a four-year selection in the Kansas Masonic All-Star Marching Band.
By Zane Schultze
PITTSBURG, Kan. – There are lots of loud things at the Kansas Shrine Bowl - the crash of players colliding, of cheerleaders shouting, of fans cheering. But of all those things, none may be louder than South Coffey County High School's Brayton Lind.

Huddleston would know. The two were busy in the leadup to the 2022 Kansas Shrine Bowl participating in the marching band’s annual summer camp, which the two have attended for the past four years.

This year that work paid off when Lind won the camp's Masonic pride award for his enthusiasm.

Lind was shocked when his name was called during the camp’s awards ceremony on the Pittsburg State University campus Friday, the day before the Kansas Shrine Bowl. 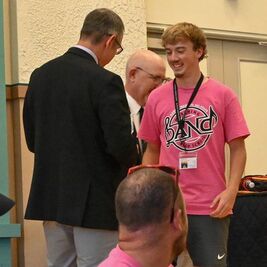 Lind receiving the Masonic Pride award.
“I was honestly very surprised,” Lind said. “I mean, yeah, I am always going to be around and doing stuff, but I feel like there were many others that could have been chosen other than me.”

To Huddleston, though, it made perfect sense.

“He definitely deserved the award,” Huddleston said. “He is loud and not hard to notice. He talks to everyone, and everyone knows him.”

Lind said it’s easy to be loud and excited at the camp. The Kansas Shrine Bowl has been around since 1974 to raise money for and awareness of Shriners Hospitals for Children. He said he also just enjoys playing a loud instrument—the trumpet—and likes to make noise so he can make new friends.

“I am really loud because I want people to know who I am and why I’m here,” Lind said. “I mean, if you are going to be here and be quiet, what is the point?”

“The people around me make this camp what it is,” Lind said.

This year, his last at the camp, he’s tried to show others that being loud and excited helps make the camp more fun for everyone.

“When they come back and I’m not here,” he said, he hopes “they do the same thing as me, which is include others and be excited and loud.”

Reflecting on his last week at the camp, Lind said he wants others to attend and benefit from it like he has.

“It’s a great experience,” he said. “The opportunity to meet new people and have them become your friend is and will always be there. Coming here can create those types of friendships that last forever.”
This story was created as part of the Pittsburg State University Department of Communication Shrine Bowl Media Camp. Ken Ward contributed to the story