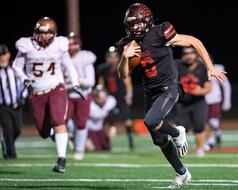 Torrey Horak helped lead Rossville to the 2A State Championship
​Since the first Kansas Shrine Bowl in 1974, nearly 3,500 players have represented 343 schools across the state. With that many players, it comes as no surprise that there have been several families with multiple appearances in the event. In 2022, there are two players set to become the third member of their family to play in the Kansas Shrine Bowl, as Torrey Horak (Rossville HS) and Brett Sarwinski (Galena HS) were both named to the East Squad. Sarwinski follows in the footsteps of older brothers P.J. (2017 East) and Nick (2020 East), while Torrey's path was blazed by Thatcher (2015 East) and Tucker (2016 East).

"It's an amazing feeling to be selected to the Kansas Shrine Bowl," said Horak. "It's an honor to be selected to play in such an iconic game that's put on for these kids! Both of my brothers told me to soak in every second of the experience. It's one that neither of them will ever forget."

And while earning a Shrine Bowl roster spot is worthy of celebration by itself, the similarities among the Horak brothers run deeper than even family ties.  Each of the Horak brothers comes to the Kansas Shrine Bowl after helping Rossville High School to undefeated KSHSAA championships. Torrey lifted the Class 2A trophy in both 2020 and 2021, quarterbacking the Bulldawgs to consecutive 13-0 records. He passed for 1,347 yards and 12 touchdowns in 2021, throwing only one interception for a QB rating of 124.2 and added 1,009 yards and 14 touchdowns on the ground. 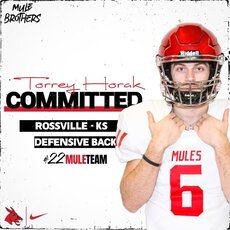 Tucker also closed out his high school career with back-to-back undefeated seasons, leading the 2014 Rossville squad with 2,070 yards passing and 2,859 yards rushing as a senior.

​​In signing an NLI to play at the University of Central Missouri, Torrey will also follow in his brothers' footsteps into the MIAA, as Thatcher (baseball, Washburn) and Torrey (football, Pitt State) both extended their athletic careers into college. 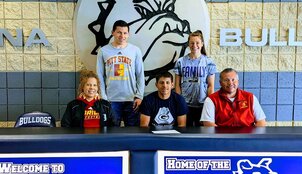 Sarwinski inks with Pitt Baseball
As he prepares for camp, however, there is one final similarity that awaits the most recent Horak brother. Both Thatcher and Tucker were on victorious East squads, but since those back-to-back wins in 2015 and 2016, the West squad posted wins in four of the next five games. Does that family history add any pressure? Not for Torrey.

"In the end, this game is all for the kids," said Horak. "I think the Kansas Shrine Bowl and the help it gives to these children is unmatched, and I cannot wait to be a part of it!"​ 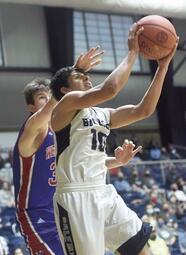 Brett Sarwinski led the Bulldogs to the 3A State Basketball Tournament
All three Sarwinski brothers are also making wave post Kansas Shrine Bowl with both elder brothers playing football at Pittsburg State, with P.J. earning 2021 First Team All-MIAA honors at linebacker. Brett has signed an NLI to play baseball for the Gorillas. The Sarwinski lineage also stretches into the coaching ranks, as father Beau Sarwinski was an assistant coach for the East squad in 2010 and 2019.

As the Kansas Shrine Bowl looks ahead to its next fifty years, the outstanding talent on display across the state promises many more family success stories like these.