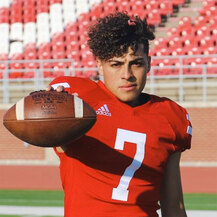 ​Following up on an outstanding senior season that saw him earn First Team All-State honors from Sports In Kansas, the Wichita Eagle and KSHSAACovered.com, Emanuel Aguilar was one of two kickers selected for the 2022 Kansas Shrine Bowl. The selection marks the first time that specialists have been included as a separate category in the balloting, giving Aguilar the opportunity to become the 33rd player selected from Dodge City High School.

"It's a dream come true," said Aguilar. "As a kicker, opportunities like this don't come around often. To be chosen out of all of the great senior kickers in Kansas is huge."
Aguilar was the leading scorer for Dodge City, helping the team to a 6-3 record in 2021 with 65 points on the year. He recorded 24 touchbacks in 51 kickoffs on the year, totaling 2,789 yards. The senior posted two 12-point outings on the 2021 campaign, against Liberal and Garden City.

And although hitting for a dozen points in two games is certainly memorable enough for any kicker, the win over long-time rival Garden City is certain to be talked about for years to come.

​In the 123rd meeting between the western Kansas powers, Aguilar nailed a school-record 55-yard field goal for the Demons and a 52-yarder as time expired in the half, but Garden City took a 21-6 lead into the locker room.

Dodge City stormed back to take the lead, with a 42-yard make by Aguilar with 3:31 to play putting the Demons up 29-21. The Buffaloes kept the storybook scenario alive, forcing overtime with a touchdown and two-point conversion.

​Despite a missed FG on Dodge City's first overtime possession, Aguilar's PAT ran straight on the second possession, and the Demons held on for the win. 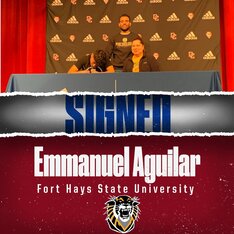 "Looking back, I'm glad I missed (the 27-yard FG), because I learned from it and we still ended up winning the game," said Aguilar. "Every field goal during my senior year was pretty special. I saw it as another opportunity to prove everyone wrong. Obviously, kicking a 50-yard FG in front of Brent Venables is pretty cool, and then the following week at Garden City kicking for 55, 50 and 42."

​Aguilar's performances drew a lot of recruiting interest, and the DCHS product is set to join Fort Hays State University in the fall. And continuing in a decades-long tradition, the shared experience of being named to a Kansas Shrine Bowl roster has helped ease the connection between Aguilar and his new teammates. 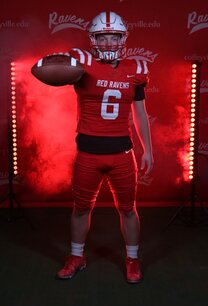 "I've been (on campus) all summer and talked to a couple of guys about it and they absolutely loved it," said Aguilar of the experience. "It really is an honor to be chosen and to be able to be a part of something like this. I'm far from being the strongest and fastest, but I truly believe you can accomplish anything you set your mind to. I hope I can help in whatever way I can to help win the game and inspire as many kids as I can."

​Aguliar’s counterpart is Davis Merrick from Independence, who brings an impressive resume to the field for the East. Merrick finished his senior campaign All SEK 1st Team, All Area 1st team, 4A All State, and Sports In Kansas top 100 seniors.
​
There’s no doubt the 2022 Kansas Shrine Bowl will be impacted by the presence of these two weapons. Be sure to get to Pittsburg, Kansas on Saturday, July 23rd to see them in action. Tickets at www.KansasShrineBowl.com/Tickets. Events at www.KansasShrineBowl.com/Events.