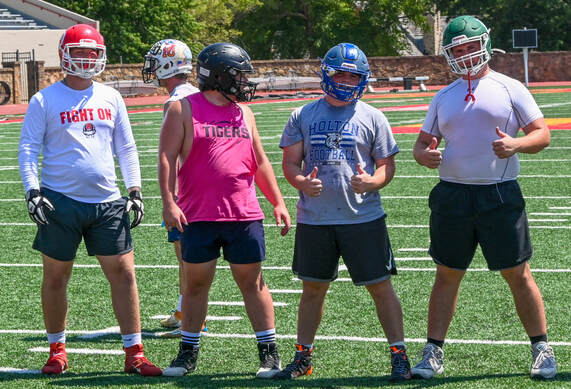 Rather than going straight to Pittsburg State University’s Carnie Smith Stadium, the Shrine Bowl’s East Team arrived in Ottawa a week before the game. After two days of two-a-day practices in the middle of a scorching heat wave, some players were rethinking their decision to play.

But while the intensity stayed high once the team arrived in Pittsburg, Williams said the players really started enjoying the whole thing. He said that from the point the East Team came together in Ottawa a week ago, the team built a tighter bond every day, but especially when they got to Pittsburg.

Williams said things really started clicking not on the field but at a trivia event the Thursday night before the game, when the players started really enjoying hanging out together.

“It’s just nice to have a bunch of guys who like the same things as you do,” he said.

Among those guys is Nemaha Central’s Zac Kramer, Williams’s teammate on the East Team and future teammate at Baker University. Kramer said he has known of Williams for years as the two battled on the field. He said they’ve become closer since graduating high school and as they prepare to join forces at Baker.

Kramer called Williams a “phenomenal player” and that their time in the leadup to the Shrine Bowl has allowed him to learn about Williams both as a teammate and as a person.

During that time, Williams has had to learn to play a different style of football. For him, the wishbone formation, ground-and-pound, downhill running style of offense he played at Holton is in the past. But East Team offensive line coach Rick Pollard, the new head coach at Lansing High School, said Williams is a smart player who has adapted well.

‘He’s had to learn some techniques, but since he’s such a smart kid and a great athlete, he’s put 100% effort into learning something new, and he’s done a great job,” Pollard said.

Williams says that it is pretty cool to learn from Pollard because before becoming the new coach at Lansing he coached Cooper Beebe, an offensive guard who is currently playing at Kansas State University.

After Saturday’s Shrine Bowl, Williams will turn his attention to Baker University, where he’ll play and work toward a major in business. After that, he plans on working for a heating and air company, though he hopes one day that he’ll be able to own his company. During high school Williams got his heating and air certification by going to Washburn Tech in his last two years of high school.

Williams said other high school players who want to make the Shrine Bowl should keep working hard, even when they don’t want to, no matter how hard the path looks.