THREE OF A KIND

With last-minute invite, Concordia's Keyan Miller makes it three on the field at Kansas Shrine Bowl 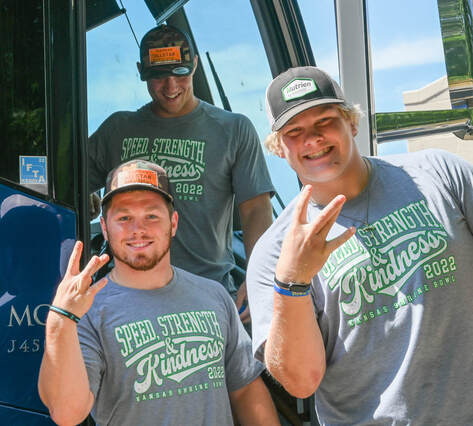 Concordia's Keyan Miller, bottom left, and Dalton Owen flash "W" for west as they step off the bus at Pittsburg State University's Carnie Smith Stadium for the Kansas Shrine Bowl July 20, 2022.
By Dakota Brockman
PITTSBURG, Kan. – Most Kansas high schools are lucky to have even one person on the field at the Kansas Shrine Bowl. This year, Concordia has three.

Keyan Miller, who graduated in May after his final season as a running back for the Concordia Panthers, was not an original selection for the West team. But when another player dropped out of the game earlier in July, Miller got a call inviting him to compete for the West Team as a fullback.

Miller said he was happy to travel to Pittsburg State University’s Carnie Smith Stadium for the game, even if he wasn’t on the original roster.

“I’m not mad about not being chosen first,” he said. “It is honestly just a privilege to be here and help fundraise for the kids.”

Miller’s addition to the roster made him the third Panther working for the West Team at this year’s Kansas Shrine Bowl. He joins offensive lineman Dalton Owen and 3A assistant coach Jordan Echer, the two players bringing the total of Kansas Shrine Bowl players from Concordia to 11.

The Kansas Shrine Bowl, now in its 49th year, is an annual all-star game in which the best graduated seniors from the east and west sides of the state go head to head to bring attention to and help fundraise for the kids in Shriners Hospitals.

That purpose behind the game was front and center for the players, who got to visit with patients of Shriner Hospitals and play games to simulate what living with a disability would be like. Miller said that he grew a huge amount of sympathy and gratitude for the kids of Shriner Hospitals and that it was a humbling experience to learn all of the trauma they go through on their way to recovery.

On the field, Miller called it a “blessing” to get to play with Panther teammate Owen and coach Echer one final time. Owen and Echer agreed. Owen said that he was excited to have a “final ride” with Keyan and walk on the field side by side with him just as they did freshman year and that Miller has evolved into a strong leader and a hard worker.

Echer, meanwhile, said that he was grateful to get one last chance to work with Miller, whose work ethic and “goofy” personality he’s enjoyed on the field, in the weight room and during the track season for the past three years.
This story was created as part of the Pittsburg State University Department of Communication Shrine Bowl Media Camp. Ken Ward contributed to the story